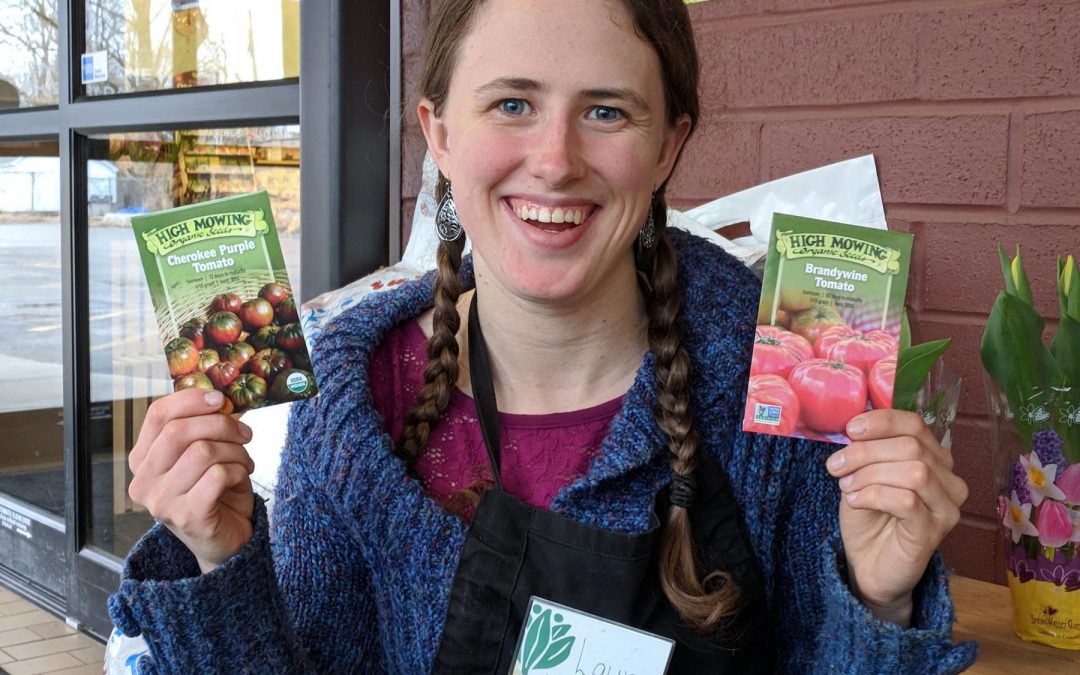 Laura’s back with the dirt (harhar!) on April planting. If you want to plant tomatoes from seed, get movin’! Here’s the skinny from the farmer herself:

Brandywine and Cherokee Purple both produce big tomatoes, up to one pound, and both are heirloom tomato varieties, open-pollinated (non-hybrid) varieties that have been handed down from generation to generation of farmers and gardeners. That’s where the similarities end, though! Cherokee Purple tomatoes are a reddish-brown color with faint green streaks. Their flavor is complex, rich, and grown-up. Brandywine tomatoes are a cheerful pink color, with a juiciness and sweetness to match. Why not grow both varieties in your garden this year and find out which you prefer?

You can stop by the co-op and pick up seed packets of Brandywine and Cherokee Purple from High Mowing Organic Seeds. The first half of April is the time to start tomato seeds indoors. Plant them in a good potting mix (like the organic potting mix the co-op sells), and keep this soil moist and between 60 and 85 degrees while the seeds are germinating. After 6-8 weeks indoors, the tomatoes will be ready to transplant to the garden after the last frost, around Memorial Day weekend.

Does all this talk of tomatoes have you dreaming of growing more of your own ingredients for salsa and spaghetti sauce? The co-op also sells seeds for Early Jalapeno Peppers, parsley, basil, and cilantro, all of which can be started indoors in April and transplanted outside later in the spring. Alternately, you can direct seed parsley and cilantro in the garden after the last hard frost.