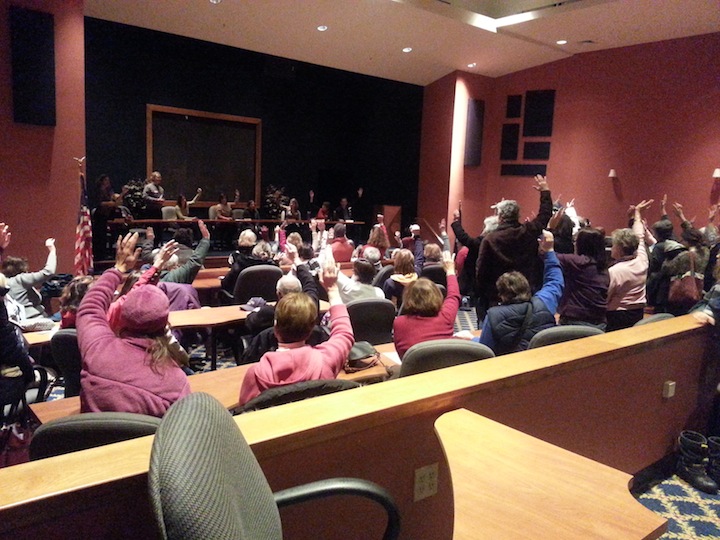 On Tuesday, Feb. 25, 98 member-owners of the East Aurora Cooperative Market voted unanimously to approve two proposed changes that bring the store significantly closer to being realized.

At the meeting, which was attended by nearly 120 individuals, 98 of who are primary member-owners and therefore able to vote – member-owners approved changing the Certificate of Incorporation (COI) to enable the co-op to offer a fundraising opportunity known as Preferred Shares. The modification to the corresponding bylaw for the COI was also approved.

The term Preferred Shares in this instance refer to non-voting shares, as opposed to Common Shares, which are member-ownerships. Both Preferred Shares and Member Loans will be offered during the co-op’s upcoming capital campaign, which will begin as early as this spring. “After fine-tuning our pro forma, our finance committee determined that we needed to add Preferred Shares to the mix to better capitalize the project,” said Mike Benzin, co-op treasurer. “Our original COI didn’t allow for that, and in order for us to move forward we needed to put it in front of our member-owners, who gave a resounding – and official – thumbs-up to the idea. Now we know the capital campaign is in the best position to succeed.”

The co-op project manager and board of directors are in negotiations for a site, and will announce the location just prior to launching the capital campaign.

“The special meeting, and the voting process, were expressions of a co-op in action. As democratic organizations, our member-owners have a very real stake in how we operate,” said Mary Aiken, co-op president. “This is one of many instances to come in the very near future where our member-owners will be called on to participate in this fashion,” she said.