Brussels Sprouts often get a bad rap, like lima beans, but are actually quite tasty, if I do say so myself.  (Not sure I can say the same thing about lima beans, but I eat them anyway.)  If they aren’t a staple on your Thanksgiving table, think about trying them out at your celebration this year.  The recipe below is good any time of year–heck, ANYTHING with bacon is good anytime of year!

-A cruciferous vegetable, brussels sprouts are in the same family as cabbage, broccoli, kholrabi and kale

-Brussels Sprouts are indeed named after the city in Belgium, but aren’t believed to have originated there 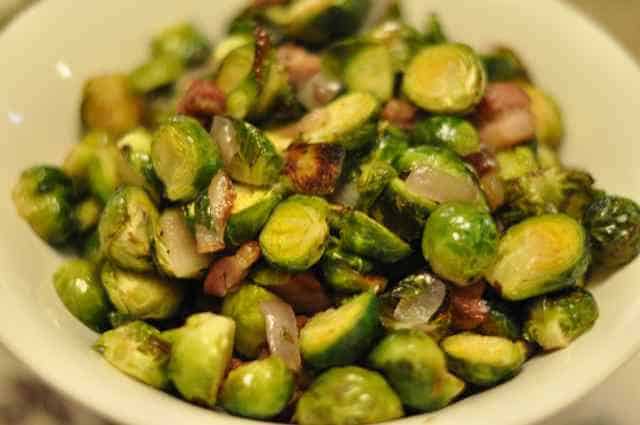 -Most of the brussels sprouts grown in the United States come from California and New York–go get some!

-They don’t keep long; buy them only a day or so before using them

-Brussels Sprouts are high in Vitamins K, C, A and folate and fiber

-About 1.5 C Brussels Sprouts provides a third of your recommended daily intake of Alpha Linolenic Acid (ALA), the most basic of Omega-3 Fatty Acids

-Steam, saute or roast rather than boil; fewer vitamins and minerals are lost

-Discard outer/wilted leaves and halve; steam for 5 minutes then toss with honey-mustard dressing

-Toss with olive oil, salt and pepper; roast at 400 for 35-40 minutes, turning so all sides brown evenly

-If you’re a chicken/broccoli casserole kind of person, try subbing them for the broccoli or throwing them in a stir-fry

(from Ina Garten’s ‘Barefoot in Paris’ cookbook, although I lessened the salt and raisins because they are both more than necessary.  While my husband might be picky about cheese and creamy things, he does like his vegetables!  He loves brussels sprouts and ever since I made this dish years ago, it’s my ‘go-to- brussels sprouts recipe.  This would also be a fantastic Thanksgiving dish.)

1.  Heat olive oil in large saute pan over medium heat and add pancetta (or bacon).  Stir often and cook until fat is rendered and pieces are browned and crisp, about 5-10 minutes.  Remove to a paper towel.

3.  Once brussels sprouts are finished and all the liquid has been absorbed, add the pancetta back into the pan and season to taste.