Are you an ‘organic’ shopper?  Do you even know what, exactly, the term ‘organic’ means when its used on a package?  And what about those prices?!  If you’ve ever felt overwhelmed while shopping in the produce section, read on.

Theresa Bindig, East Aurora resident and a Registered Dietitian who works at Neighborhood Health Center in Buffalo, taught a class entitled ‘To Buy or Not to Buy Organic’ at the East Aurora Cooperative Market office Sep. 24.  The class was the first of three in the co-op’s ‘Food for Thought’ series this fall.

“There are a lot of misconceptions out there,” Bindig said. “I wanted people to feel more educated when they make their own choices.”

Bindig opened with the United States Department of Agriculture’s (USDA) definition of ‘organic:’ “Organic is a labeling term that indicates that the food or other agricultural product has been produced through approved methods. These methods integrate cultural, biological, and mechanical practices that foster cycling of resources, promote ecological balance, and conserve biodiversity. Synthetic fertilizers, sewage sludge, irradiation, and genetic engineering may not be used.”

One of the discussion points of the class focused on why organic foods cost more than traditionally produced foods.

“I just never know if it’s worth it,” said Barb Byers, a co-op member.

-Loss of crops due to lack of synthetic pesticide use
-Higher labor costs due to hand-removal of pests and weeds
-Crop rotation
-Theory of supply and demand (.9% of farmland in US is ‘organic’)
-Cost of organic manure
-Cost of organic diet for livestock
-Fee for certification (can range from $400-$2,000 per farm annually)

Bindig said some of the reasons organics cost more might change in the future.

“Right now, government subsidies for traditional farms are $7 billion, while subsidies for organic farmers are only $15 million,” she said.

Another topic of discussion was whether organic food is healthier than food traditionally produced.

Bindig said many studies showed that organic produce contained a higher amount of vitamins and minerals, that organic meat and dairy products tend to have lower total fat and ‘healthier’ fatty acid composition than traditional food, and that wheat has become less nutritionally dense through modern farming.

“Investing your money in food now means you won’t pay for it later,” Bindig said, of decreasing disease risk through a healthy diet.

Lastly, Bindig talked about pesticide, antibiotic and hormone use in traditional farming.

“There haven’t been a ton of studies done, but enough to make people want to decrease their exposure to them,” she said.

The use of pesticides, hormones and antibiotics have been linked to depleted ozone, contaminated drinking water, negatively affecting marine life, cancer, obesity and diabetes, reproductive complications and neurological disorders.

According to Bindig, 80% of all the antibiotics sold in the United States in 2011 were for livestock.

“This shocked me,” she said.

Bindig ended the class with some tips for smart shopping at the grocery store.

The Environmental Working Group’s Dirty Dozen and the Clean Fifteen are lists of foods with the most and least pesticide use, respectively.  The ‘dirtiest’ items include apples, celery and cherry tomatoes, while the ‘cleanest’ are asparagus, avocados and cabbage.  For the complete list, please go to: www.ewg.org/foodnews/summary.php.

“You have to pick and choose what’s important to you,” she said.

Upcoming Food for Thought classes include: Vegetarian Nutrition (Oct. 22) and Diabetes (Nov. 19).  All classes are free and open to the public.

(Courtesy of the East Aurora Advertiser) 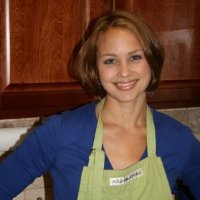 Holly is a registered dietician and a freelance writer. She works as a clinical dietitian at DeGraff Memorial Hospital in North Tonawanda, teaches fitness classes at the Southtowns Family Branch YMCA and shares her love of food through her blog www.thefrozenpineapple.com (new website coming soon), as well as Buffalo News (Refresh), and the East Aurora Co-op Market (the "Eat This" blog series you see here). She lives in East Aurora with her husband Andrew, an East Aurora native and East Aurora Co-op Market board member.