[Yet gain, I’m over my head in schoolwork–this time it’s three tests and a giant project–so I’m re-posting this post from last year at about this time.  I sure hope this re-posting business doesn’t turn into a trend…  However, I’m glad I did, since scanning through this reminded me to make one of my favorite soups–Ribollita–the recipe for which is below.  Hope you like it as much as I do!  Next week: APPLES!  Or let’s hope so…]

You’ve probably seen Swiss Chard before in the produce section next to its better-known counterparts, kale and mustard greens, but have you ever given it a shot?  If you like your greens, try Swiss Chard next time you’re looking for something to saute, steam, roast or throw into a soup. 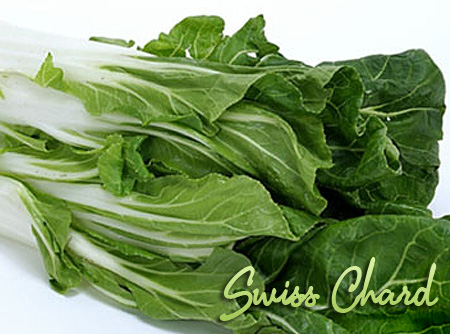 -A member of the beet family

-A slightly bitter, leafy green with stems that range in color with white, green and red being the most common

-Young, tender leaves can be used raw in salad; if harvested later, the larger, tougher leaves should be cooked

-NOW!  Swiss Chard is in season here in New York until about the middle of October

-Chard is high in Vitamins A, C and K

-Throw a couple handfuls into a soup, like Ribollita

Heat oil in saute pan over medium heat.  Add garlic and cook until fragrant, about 1 minute.  Add a handful of chard at a time, stirring after each addition and allowing the greens to wilt.  Stir in lemon juice, pepper flakes and nutmeg.  Cook chard until tender, about 5 minutes more, season with salt.

Nutritional Information: per 1/6th of recipe

Holly R. Layer received a B. A. in Journalism from Penn State and served four years in the U. S. Air Force before deciding to go back to school to become a Registered Dietician.  She loves running, reading, fine stationery, colorful kitchen gadgets and ALL things food-related.  She is currently living with her husband, Andrew, an East Aurora native, and their giant dog in a hotel while they house-hunt in the area.  You can find her at www.thefrozenpineapple.com.