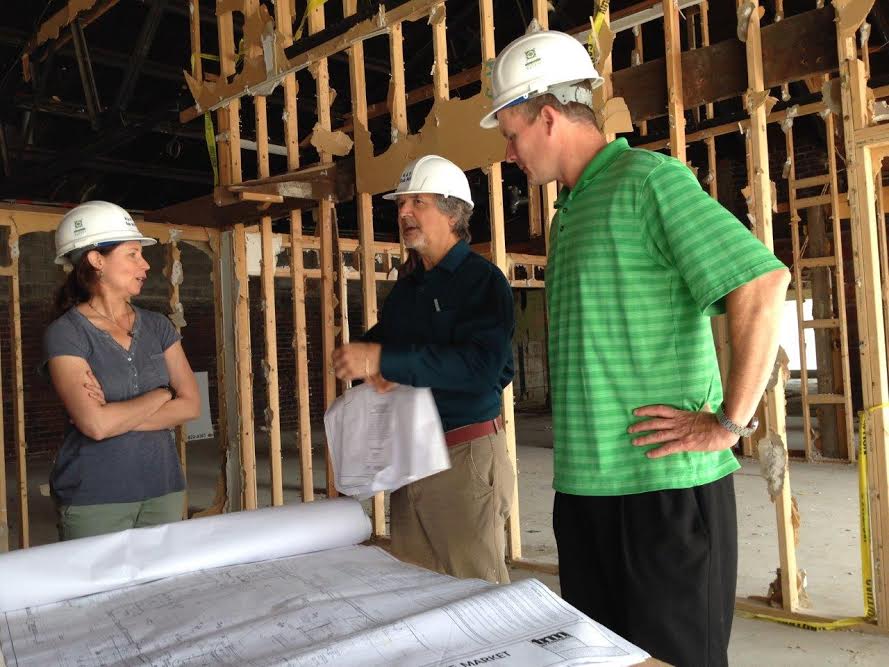 Thank you to the East Aurora Advertiser for a great profile of our General Manager Terry Wittenrich! Here’s the article:

New manager will lead Co-op Market in Village
by Olivia Cunningham, East Aurora Advertiser
As the East Aurora Cooperative Market prepares for its fall opening, newly-hired general manager Terry Wittenrich is busy completing the groundwork necessary to go from an empty storefront to a fully functional grocer with a natural, organic bent.

In the few weeks since he was hired as the store’s first employee, Wittenrich has supervised the purchase of 148 pieces of equipment, from refrigeration cases to a pallet jack, set up phones and a point of sale system, and planned out hiring details. He is currently working out of a church nursery in Orchard Park, since the store’s location at 591 Main St. in East Aurora is undergoing demolition. “It’s a lot to learn, a lot to take in,” Wittenrich said. “My head is spinning sometimes.”

Once the demolition finishes, the construction will begin, and Wittenrich hopes to be able to work in the store by mid-July. In August and September he’ll start hiring a team of roughly 35 employees, and the store plans to open in October.
Wittenrich began his career in retail in 1986 at Tops in East Aurora, which was then a family-owned business located near the traffic circle on Main Street. He recently left Dash’s Markets, another family-owned grocery. “I’ll never forget those people and what they did for the community back then,” said Wittenrich, who hopes that the new co-op will be community-centered and fill the void in terms of offering healthy foods.

“I’ve been here all my life. I was born and raised in East Aurora, and I know a little bit about what people expect,” he said. “I want that friendly atmosphere, that warm, welcoming atmosphere.” Wittenrich plans to prioritize local, organic, natural and healthy options at the store, which he said will set the co-op apart from larger grocery stores and chains. Because of the co-op’s smaller size and narrower focus, he hopes to work more effectively with local farmers than a store with a corporate model. “We are going to be another option,” Wittenrich said. “They’ll be a friendly competition.” Currently, the closest cooperative option for shoppers is Lexington Cooperative Market in Buffalo.

“The community is really taking ownership of this organization, which is a great thing,” project manager Sheila Conboy said. Both Conboy and Wittenrich report to the board of directors, who are accountable to the co-op’s member-owners. Conboy’s position will gradually phase out as Wittenrich takes over.

The search for a general manager for the new store began with 30 candidates and was narrowed to three finalists. Wittenrich was not only the only finalist who lived locally, but the only one from New York State. “That meant something to me, and I hoped that it would mean something to the board,” Wittenrich said. “Everybody is so engaged in this co-op. Everybody is so excited about this co-op. And it’s so refreshing to come into work every day knowing that you’re working for a cause.”

The co-op, which has been in the works for five years, currently has slightly over 1,100 member-owners. The households are concentrated in East Aurora, but Wittenrich and Conboy said that they are also in Elma, Colden, Orchard Park and other nearby locations. At the end of the year, any profits from the store will be distributed among the member-owners based on how much they shop at the market.
“We have an incredible membership,” Conboy said. “We’re very encouraged by that.”

Wittenrich lives in West Falls and enjoys seeing the community’s interest in the new store at ball games and other local events. He hopes to someday retire from the co-op, after a long career there. “It feels good to be home,” Wittenrich said. “People are going to know me as the co-op guy, and that’s what I want.”